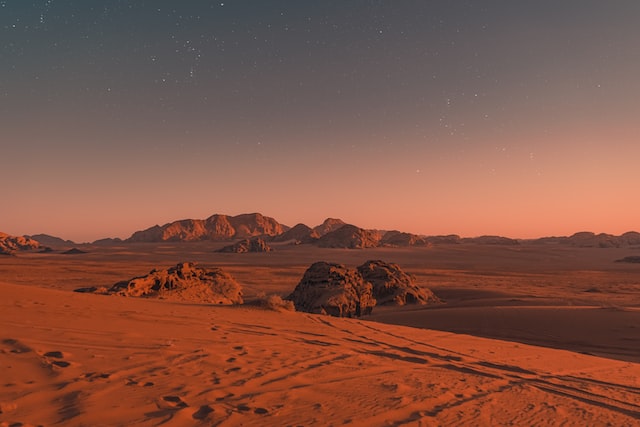 From the first moment humans set eyes on Mars in the night sky, we’ve been absolutely captivated by it. At first, it looked like another star-like object – but one whose strange reddish hue separated it from countless other shimmering peers. This unique planet was recognizable by the ruddy arc it traced through our night sky – but we knew nothing of the Red Planet for the longest time.

Then, the late 19th-century telescopes revealed Mars’ surface, which would become the subject of countless space art prints since. That surface immediately jumpstarted imaginations worldwide, resulting in the specific type of alien in our pop culture – the (often war-loving) Martian. There’s a reason for that; the landforms and patterns seen on the surface of Mars were mistakenly recognized as signs of a booming Martian civilization.

Of course, now we know that there are no mighty canals or artificial constructions of any kind on the Red Planet – but that fact hasn’t lessened our fascination with Mars one bit. At the same time, we’ve learned that billions of years ago, this toxic, dry desert planet might have been as habitable as our own. And that has led our fascinations in a new direction: today, we’re more interested in building our own colonies on Mars than in discovering an ancient Martian civilization.

Since the advent of the space programs of the 1960s, people have been obsessed with the past and future of Mars. We want to know what Mars’ strange journey can teach us about the way planets change and evolve over time. And, of course, we want to know whether the planet was once home to alien life. However, we have no concrete findings as of 2022. So far, we’ve only sent drones and unmanned spacecraft to the Red Planet.

And that’s probably about to change.

NASA has publicly proclaimed that it wants to send the first humans to this majestic planet by the end of the 2030s – meaning we could see people on Mars in less than 20 years! Before then, several more unmanned missions will be sent to explore the planet further and do the prep work necessary for a human visit.

These days, most people want to know how the likes of SpaceX and NASA plan on visiting and colonizing Mars. But that’s not the only question worth asking. Besides the “how”, plenty of folks want to know about the “why” of it all.

The main reason Mars is so fascinating to our scientists is the potential for finding the first alien life. Every bit of data we’ve gathered over the past 100 years tells us that Mars was most likely quite capable of sustaining ecosystems at some point in its long history. And that means it could still play the role of a microbial life incubator to this day.

Can We Terraform Mars?

Mars is right next to Earth in the alignment of the Solar System – the fourth planet from our Sun. It’s also just a little over half the size of Earth. And even more importantly, its gravity is less than 40% of our own; meaning you can lift and move things around on Mars with far less strength.

Interestingly enough, Mars needs much longer to complete its orbit around our native star – but its axis rotation happens at almost the exact same speed. The result is a Mars year that lasts for over 680 days, but with the day being less than an hour longer than Earth’s.

And despite the Red Planet’s much smaller size, its land area is pretty much equivalent to the size of our combined continents. That means a terraformed Mars could, at least theoretically, have roughly the same amount of land “real estate” habitable for plants, animals, and humans. Unfortunately, we’re nowhere near making that happen. The planet is encased in an atmosphere of carbon dioxide, making it thoroughly unhospitable to Earth lifeforms. Methane gas also appears periodically in Mars’ atmosphere, and the soil seems to contain plenty of toxic compounds.

For now, practically the only good news is the existence of water on Mars’ polar ice caps. However, it may be found in equal abundance below the planet’s surface. But even if we introduced enough oxygen into the atmosphere and managed to sustain actual liquid water on its surface, we wouldn’t do much in the long run. These Earth-like conditions wouldn’t last long, because the planet has no magnetic field to protect it from solar winds. These would, sadly, revert our terraforming efforts pretty fast.

However, some NASA scientists have put forth theories about an artificial magnetic field we could place at a specific point between Mars and the Sun. Theoretically, this could protect the surface of Mars from devastating solar winds.